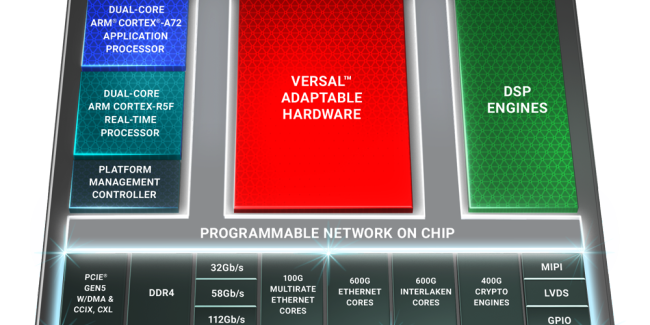 Xilinx unveiled its Versal Premium lineup of Adaptive Compute Acceleration Platforms (ACAPs) that wield a new take on FPGA design, building on its Versal AI Core and Prime series. Last year, Xilinx started sampling the Prime and AI Core series, two of the six Versal product lines that it has planned, and today it is unveiling more details about the higher-end Premium series, although it won’t start sampling until 2021.

We covered Xilinx’ ACAP concept in more detail last year, but as a refresher, Xilinx introduced this term because a modern FPGA contains much more than such the programmable FPGA fabric. Xilinx has divided its Versal compute engines in three categories: scalar engines, adaptable engines and intelligent engines. There is, of course, also a multitude of I/O hardware and interfaces (such as DDR4 and PCIe 4.0), and it is all connected via a programmable network-on-chip (NoC). This makes the ACAPs adaptable to a diverse range of workloads.

Density comes courtesy of TSMC’s 7nm process node paired with a modular design that incorporates a dual-core ARM Cortex-A72 application processor and dual-core ARM Cortex-RF5 real-time processor for scalar operations, along with a PCIe Gen5 controller that supports both CCIX and CXL protocols. The chip also wields a DDR4 controller, (up to) 112G PAM4 transceivers, 600G Ethernet cores (up to 5Tb/s), and 400G crypto engines (up to 1.6Tb/s). Xilinx says the crypto engines make the Premium lineup the only platform with hardened 400G crypto support for support for AES-GCM-256/128, MACsec, and IPsec.